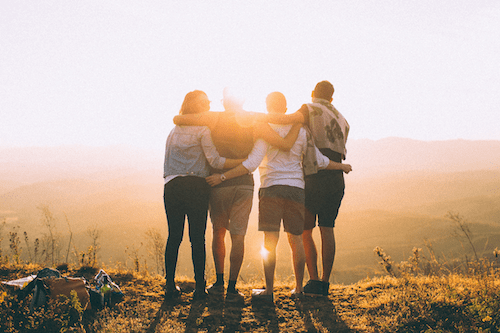 byHeather Strong (in her own words)

When I was 13 years old, I was considered "homeless."

I kept running away from my mother's battle with alcoholism, from one friend's house to another, and back again. With CPS involved a bit later on, they found me a temporary place to stay when I lived in an Our Family Services youth shelter on 5th St. here in Tucson, Arizona. I remember sleeping on an uncomfortable cot in a large room with about a dozen other teen strangers who were around my same age.

When I arrived at the shelter, I was wearing a pair of forest green man-made leather sandals that were so worn, the metal was protruding out of the bottoms. That's when reality set in for me and I realized I was living poorly. I thought, "Wait, I'm poor?!" Although I very well knew my own mother wasn't able to take care of me, let alone buy me a new pair of shoes.

Although I didn't experience the most pleasant nights of sleep, I was at least safe and that's all that mattered to me at that time. I was scared of not knowing what was going to happen to me and my mother, but I wasn't afraid to let my friends and teachers know what was happening. I knew I was surrounded by helpful people and resources to get me through some very intense moments. I was brave to trust them, and I was glad I did because they encouraged me to write about my feelings and experiences through poetry. Writing is what made my life make sense.

When I left the shelter about a month later, I was wearing a pair of new, bright white sneakers that the shelter bought for me.

Although I was quite resentful, I was strong and held on to doing well in school and keeping up with my poetic writing. I believed there were better days ahead because I was surrounded by people who cared about me and my well-being.

I returned home to my mother for a short time before I ended up moving back East where my grandparents would raise me for the next four years of my high school days. I learned that even being generations apart from one another, often not understanding each other's perspective, they chose to help me and give me the stability and encouragement I needed so I could graduate (in the top 15% of my class).

About 13 years later, not too long after I graduated from Penn State by paying my own way since I was declared financially independent by the age of 17, I became a high school teacher early on in my career. I taught teens who were predominately at-risk Hispanic and low-income teens on the Southside of Tucson for about nine years.

I wanted to teach because I wanted to give back. I was appreciative of all the community leaders, counselors, and teachers who supported me during a challenging time growing up. I became passionate about social justice, giving teens the same opportunity I had by expressing themselves freely through the power of the written word and scholastic journalism, and encouraging them to go to college; to reach further than their own backyard.

I often wondered what would have come of me if I hadn't had a place to stay when I ran away and was still able to go to school. I believe I wouldn't have been able to do so without important community resources for youth and adults, and especially such a powerful support system that I was very fortunate to have.

Now, I have a successful marketing career at one of the most amazing nonprofits in Southern Arizona who help people in need of a hand up, to rise up, just like I needed in the past. I experienced a bit of what it was like to walk in their shoes and I care about making a difference in their lives. In fact, one of my former high school students, who has an incredible success story of her very own, also happens to now be one of my esteemed colleagues.

And after years of disappointment, then finally true forgiveness, my sober mother and I became best friends.